We believe in Lambda Chi Alpha, and its traditions, principles and ideals. The crescent is our symbol; pure, high, ever growing, and the cross is our guide; denoting service, sacrifice, and even suffering and humiliation before the world, bravely endured if need be, in following that ideal.

A Brief History of our Chapter

Following World War II, Memphis State University experienced rapid growth due to the influx of returning veterans. Nearly all campus fraternities had been forced to shut down during the war years because all the college age men had gone to war. During the early part of 1944, the Triangle Club was formed on the Memphis State Campus. Although only one of the members of this club was still in school when the Triangle Club became Lambda Chi Alpha (John Hardy, ΖΘ10), the club was the direct ancestor of this fraternity.

With their success, the men of Delta Sigma Chi decided to affiliate with a national fraternity and through the efforts of Lew Callow (T16) Delta Sigma Chi was installed as a colony of Lambda Chi Alpha on May 22, 1948 by Epsilon Chi Zeta at Mississippi State. The first president of the new colony was Richard Bauer(ΖΘ1) and Barbara Jo Walker, Miss America 1947, was the first Sweetheart. On May 21, 1949, Zeta Theta Zeta was installed as a full chapter of Lambda Chi Alpha by Epsilon-Omicron Zeta (University of Tennessee at Knoxville).

In 1960 our chapter fell on hard times. Only through the efforts of the Fearless Thirteen was the chapter saved. Doc Dirghalli (a past Grand High Alpha) led the group back to stability. Because of this, our chapter became known as the Phoenix Chapter. 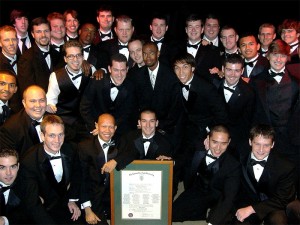 In 2002 we came back to the U of M campus with a new colony of men, who are now leading the fraternity back to a rapid recovery. It is with this fresh pioneering spirit that Zeta Theta Zeta continues to excel. We have now moved into new chapter houses at 3605 and 3609 Watauga.