The Founding of Lambda Chi Alpha 1909

Unlike most fraternities, Lambda Chi Alpha began as the dream of one man, Warren Albert Cole. He was born in Swansea, Massachusetts, and attended high school at Taunton and Fall River. While in high school, he was involved with a preparatory fraternity. He entered Brown University for a few weeks, but eventually transferred to Boston University’s Law School in the fall of 1909.

One of his earliest ventures of starting a fraternity took place at a meeting with his first cousin and a more distant relative on November 2, 1909. The date was later selected as the first formal step in Lambda Chi Alpha, but in later years, Cole said that the date had little significance.

He was a young man of pleasing personality, ordinary means, limited experience, and no unusual talents except a dogged determination to found an international college fraternity. It is hard to believe that all alone he deliberately set out to challenge the prestigious fraternity world which already boasted 46 strong, well-established organizations. 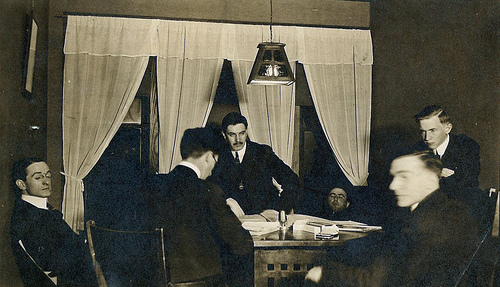 Cole first made some unsuccessful attempts at starting a fraternity, about which we know little more than names: “The Lodge,” “Tombs,” “Lambda Pi,” then it was Lambda Chi Alpha—”Loyal Collegiate Associates,” until a new meaning was adopted in 1913.

Cole boldly approached many local groups at colleges and universities throughout the Northeast in hopes of finding others willing to join his new fraternity. Before the acquisition of Lambda Chi Alpha’s first functioning chapter, Cole had corresponded with or visited 117 institutions.

Early in 1912, Warren Cole, as was his custom in attempting to establish a chapter at a school, wrote to a student at Massachusetts Agricultural College (MAC) in Amherst (now the University of Massachusetts) asking the names of the Greek-letter fraternities on campus and the names of at least two “good, non-fraternity men.” Herbert E. Cole responded with the names of six Greek-letter groups and two names, including that of Lewis Drury. Warren Cole wrote to Drury asking if he was interested in forming a Greek-letter society. Apparently Drury was quite interested, as he had his agronomy professor write a letter of recommendation to Warren Cole.

The MAC petition was duly submitted and quickly approved—after all, it was Cole’s first success in attracting a group after more than one hundred futile efforts. Lambda Chi Alpha’s first established chapter, Gamma Zeta, was born.

During the spring of 1912, Albert Cross, a student in the department of civil engineering at the University of Pennsylvania, received a letter from Warren Cole indicating that he had received Cross’ name from a mutual acquaintance and that he would like to form a chapter of Lambda Chi Alpha at Pennslyvania.

Cross liked Cole’s idea and began talking with some of his friends. One of these friends was John E. “Jack” Mason, whom Cross had met in a French class that summer. Mason, who had hardly been interested in existing fraternities at Penn, suggested to another friend, Raymond Ferris, that they “take a shot at” establishing a chapter of Lambda Chi Alpha.

Thus, with colossal nerve, Cross, Mason, Ferris, and five other men dared to launch a fraternity chapter on a campus with an abundance of long-established national fraternities. But with determination, Epsilon Zeta began.

Following the addition of Zeta Zeta at Penn State, the infant fraternity now felt confident in contacting established local groups. Cole made the acquaintance of members of Sigma Phi Delta at Brown and won its affiliation. A “picked delegation” at MIT proved successful. By the beginning of 1913, Delta Kappa at Maine was admitted as the seventh chapter.

Lambda Chi Alpha was now truly a national fraternity, even though most of its chapters were still very young and not yet well organized. The first real efforts at national solidarity were made at the Second General Assembly, held at the MIT chapter house in Boston, March 22, 1913.

When Jack Mason found it impossible to attend the 1913 Assembly, he “pulled an all-nighter” in order to give a handwritten letter to Albert Cross before his departure for Boston. The letter, which Cross presented to the Assembly delegates, contained Mason’s vision of the ideals and principles of Lambda Chi Alpha and how they would be expressed. His reason for the adoption of a new Initiation Ritual was based on the following rationale:
“The first question is, what should be the highest aim of a college fraternity? The answer is-I think-to have men of sterling character, who are efficient workers along all the lines of human activity; not students with big, all-around sympathies, who can deliver the goods in whatever activity they take up. In other words we have to preach two doctrines, the doctrine of work and the doctrine of character; or, if you wish to join the two, the doctrine of mighty energy working toward a high ideal. Nothing else counts. It makes no difference how pleasant a chap he is, if he can’t do good sincere work he’s not good, and we don’t want him for a brother. The people we do take for brothers we want to encourage along these lines all we can.”

In addition to the development of a new Initiation Ritual, the 1913 General

Assembly saw the adoption of the significance of Zeta and Lambda Chi Alpha and revisions to the coat of arms and badge.

Because of the tremendous impact of the second annual General Assembly held on March 22, 1913, this date has been chosen as the Fraternity’s Founders’ Day. This was the date on which the spiritual basis of Lambda Chi Alpha was decided by its early leaders and founders.

Theta Kappa Nu Fraternity was formed by the union of 11 well-established local fraternities on June 9, 1924. The first chapters of Theta Kappa Nu were brought together in Springfield, Missouri, through the diligent efforts of four men-all of whom recognized the need to bring together strong local chapters with high standards into one national fraternity. 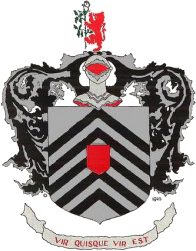 The pinnacle of the Springfield Grand Chapter was the signing of the League and Covenant-the instrument that embodied the ideals of the various groups and would bind them together to form one organization. Those present at the founding meeting were asked to come forward and sign the document. Each delegate realized that the signature meant the end of his local fraternity. In silence each delegate present came forward, removed the badge of the local from over his heart, placed it on the table, and signed the League and Covenant. Theta Kappa Nu was born.

With the help of the National Interfraternity Conference in identifying local groups and Theta Kappa Nu’s policy of granting charters quickly to organizations with good academic standards, the young national fraternity grew quickly, and boasted 2,500 initiates in 40 chapters by the close of 1926. This record expansion remains unequaled in the fraternity world.

Theta Kappa Nu placed a more consistent emphasis on high academic standards than did most fraternities at the time. Scholarships were presented annually to members who pursued graduate studies, and a Scholarship Cup and Activities Trophy were awarded to the chapters with the highest grades and the most

Theta Kappa Nu, in contrast to Lambda Chi Alpha, maintained most of its chapters at small colleges. The Great Depression hit the smaller schools, and thus Theta Kappa Nu, harder than others. Many men simply could not afford even modest “extra” costs of fraternity membership. The early 1930s saw chapters of Theta Kappa Nu become inactive for the first time. Simultaneously, the number of active members dropped by one-third. In order to maintain strength of numbers, the Grand Council reduced fees in 1933 and again in 1935. Yet, it was not enough to counter the dire economic times. 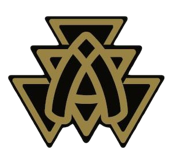 Although Lambda Chi Alpha was in markedly better shape financially, it also clearly needed to expand its roster of chapters during this same economic climate. Following cordial opening discussions between leaders from Theta Kappa Nu and Lambda Chi Alpha in 1938, a formal negotiating committee was formed.

The merger was widely supported by the leadership of Lambda Chi Alpha. The union proposal was approved unanimously during the September 1939 General Assembly. Meanwhile, at the Theta Kappa Nu Grand Chapter, after considerable discussion of the details of the merger, the decision to join with Lambda Chi Alpha was unanimous as well.

The enlarged Fraternity following the union brought Lambda Chi Alpha’s membership to 27,000 initiated members and 105 active chapters located in 39 states and one province. The union also permitted the expanded group to endure the difficult years of World War II.

What started as the dream of one man today stands as one of the largest men’s general fraternities in the world, more than 235,000 brothers strong. What began as 25 members in three chapters has grown to more than 210 active chapters and colonies in 44 states and three provinces. Today, the youngest of the 20 largest fraternities is the third largest.

Lambda Chi Alpha’s heritage-based on progressive leadership, high standards, and a determination to overcome obstacles-is the foundation on which the Fraternity’s future will be built. As a member of Lambda Chi Alpha, it is your obligation to see that the Fraternity meets its challenges, changes when necessary, stands firm on its principles, and fulfills its mission.